Physics provides a versatile background that can lead to many diverse careers. About half go to graduate school in physics or a related field, and about half go on to industries of many types. A nationwide list of employers who have recently hired physics majors with bachelors degrees may be found on the American Institute of Physics site. Detailed profiles of a selected few of our recent graduates follow below. A sampling of current positions held by recent graduates can be found at this link. 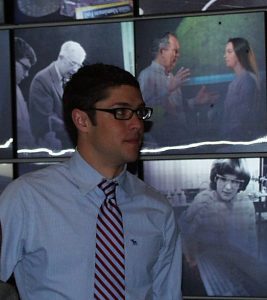 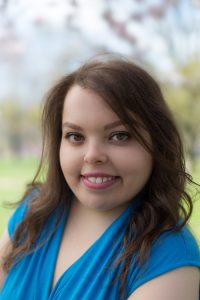 She was inducted into the national honor societies Sigma Xi, Pi Mu Epsilon, and Sigma Pi Sigma. She conducted summer research with Prof. Dougherty at Lafayette and in the guise of a Planetary Ices Research Fellowship at NASA’s Jet Propulsion Laboratory. Two abstracts at Lunar and Planetary Science conferences resulted from her research. She was also a member of the Lafayette College Dance Company. Since her graduation, Jaclyn has sought out positions in scientific public outreach, serving as a production assistant for WNET, as a digital content producer for Amplify, as a business analyst for Scholastic, and as a digital media producer for the Museum of Modern Art. She has also volunteered as a guest speaker at NYU Langone Hassenfeld Children’s Hospital, as an instructor for the amateur Astronomers Association of New York, and as a director on the Board of Directors for that organization.

Ibrahima Bah ’06 came to Lafayette as part of the first Posse cohort, asserting his intention to study quantum gravity. 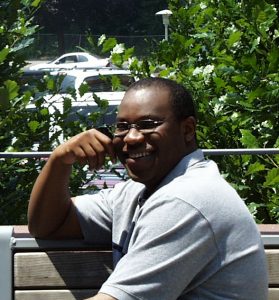 He graduated with a B.S. in Physics, an A.B. in Mathematics, Honors in Mathematics/Physics, and a still-fervent desire to study quantum gravity. While at Lafayette, he conducted research in radio astronomy at Columbia University with Dr. Helfand, at Lafayette with Prof. Hoffman, a Research Experience for Undergraduates program with Dr. Rodgers at the University of Iowa, and honors thesis research with Profs. Novaco (in Physics) and Corvino (in Mathematics.) After graduation, he studied for a year at the University of Iowa, then transferred to the University of Michigan where he earned his Ph.D. in Physics in 2012, with a thesis in quantum gravity, or more precisely in holography, AdS/CFT and quantum field theory. He completed Postdoctoral Fellowships at Service de Physique Théorique-Scalay, France, the University of Southern California, and the University of California at San Diego before accepting an assistant professorship at Johns Hopkins University. Thirteen publications authored by him and collaborators have appeared in refereed journals, with several more on the way. 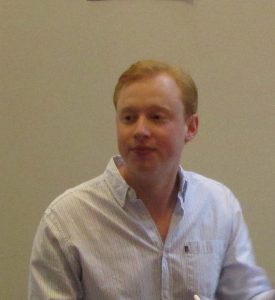 While at Lafayette, he spent a semester abroad in Milan, Italy, conducted research on phase transitions in foreign exchange time series as an independent study with Prof. Antanaitis, and presented his economics research at the National Conference of Undergraduate Research. He was inducted into Sigma Pi Sigma, the physics national honor society. During the summers, he completed internships at Valens Securities and at the Competitive Enterprise Institute, and worked as a teaching assistant at Hult International Business School. He won First Place at the Fleming Ethics Bowl and founded the Business Networking House. He is currently working as a research assistant at the Federal Reserve Bank of Dallas, assisting economists with academic and policy research. 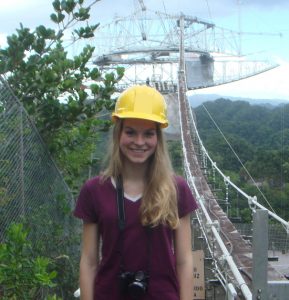 Her thesis research was conducted with Prof. Nice and resulted in a publication in The Astrophysical Journal. She was inducted into the honor societies Phi Beta Kappa, Sigma Xi, Pi Mu Epsilon and Sigma Pi Sigma. Since then, she has been enrolled in graduate study in astronomy at the University of Virginia, supported by a National Science Foundation Graduate Research Fellowship, by a Jefferson Fellowship, by a Graduate STEM Research Fellowship from the Virginia Space Grant consortium, and by a Hearst Minority Fellowship in the Biological and Physical Sciences. While at Lafayette, she conducted pulsar research for a summer with Prof. Nice, and research on eclipsing binaries as a Research Experiences for Undergraduates summer assistant with Dr. Torres at the Harvard-Smithsonian Center for Astrophysics. She also served as a teaching assistant for the Mathematics Department and as a Supplemental Instructor for the Physics Department, and performed a memorable oboe solo at the inauguration of President Byerly. At the University of Virginia, she is conducting research with Drs. Johnson and Condon.

Ryan McQuillen ’12 earned a B.S. in Physics from Lafayette College, with Honors in Physics. His thesis research was conducted with 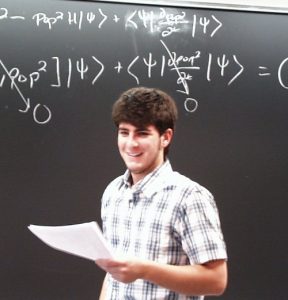 Prof. Antanaitis studying the solution structure of a nonapeptide using a combination of NMR spectroscopy and molecular dynamics simulations. He was inducted into Sigma Xi, the scientific research honor society, and Sigma Pi Sigma, the national physics honor society. After a year working as a research assistant at the Fox Chase Cancer Center studying the effects of expression systems on the efficacy of a novel antibody-based PET radio tracer for cancer detection, which led to a publication in the journal Tumor Biology, Ryan enrolled in a Ph.D. program in biophysics at Johns Hopkins University, where he is a researcher in the laboratory of Dr. Xiao studying cell division in Escherichia coli using fluorescence microscopy. One publication based on his work has appeared in the journal Science. In addition, he is currently volunteering as a microbiologist for the Monument City Brewing Company to help them establish quality control testing and yeast strain development. 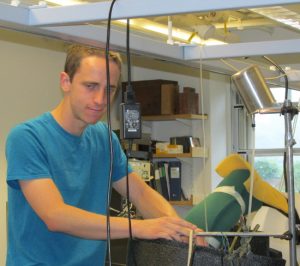 with Honors in Geology & Environmental Geosciences. His honors thesis was supervised by Prof. Sunderlin. He was inducted into the physics national honor society Sigma Pi Sigma and was awarded the James L. Dyson Geology Award. Starting in Fall 2017, he will be undertaking graduate study in geology at California Institute of Technology, supported by a National Science Foundation Graduate Research Fellowship. While at Lafayette, he conducted research for 2 summers with Prof. Dougherty in the Physics Department and as a Research Experience for Undergraduates scholar for a summer in the Physics Department at Howard University. He was also a teaching assistant in the Geology Department. His work with Prof. Dougherty led to two abstracts published by the Lunar and Planetary Science Conferences.

Our Pulse Our People